THE HISTORY OF LARD
Homeric poems already described foods that reminds us of delicatessen products.
The Romans themselves were deep connoisseurs of the fine art of delicatessen and, hence, great estimators of pork meat.
They widened their knowledge thanks to the culture of the people they conquered and then spread this knowledge in every corner of their territories.
The Roman presence in the marble pits of Colonnata is certified by the large number of archaeological finds.
Despite the lack of precise recorded finds, it is plausible to hypothesize an important role of the Romans in the introduction of slaughtering products. 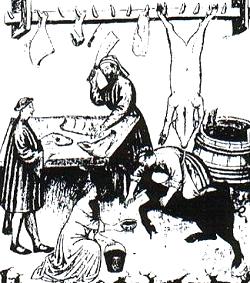 COLONNATA LARD
Colonnata lard is made with the fat layer of the back of the pork, the spongy part is removed and it is cut on one side up to the pancetta. Then it is foisted and worked according to an old tradition.
The pieces obtained in this way are put in the marble basin immediately after slaughtering. The basin is rigorously rubbed with garlic and spices thus creating, the so called “shirt”. A spice layer is laid down on the bottom.
A lard layer will be then alternating with a spice layer until the basin is full. A small marble slab will cover the basin, you only need to wait for six months before the lard is ready.
During the ageing the brine is formed for osmosis and the product slowly ages while taking the scent and the appreciated organoleptic characteristics, that are so appreciated and which distinguish Colonnata lard. 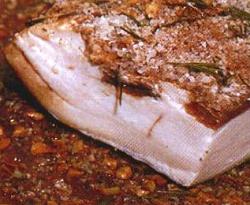 THE SPICES
The mixture used for the preparation of Colonnata lard contains:
PLENTY OF SEA SALT, BLACK PEPPER, FRESH GARLIC JUST PEELED, FRESH ROSEMARY, OTHER HERBS AND VARIOUS SPICES, SUCH AS CINNAMON, CORIANDER, NUTMEG, ANISE, CLOVER.
BOTH THE NUMBER AND PERCENTAGE OF THE VARIOUS ELEMENTS OF THE MIXTURE, MAY VARY FROM ONE PRODUCER TO THE OTHER FOLLOWING OLD TRADITIONS, WHICH ARE HANDED DOWN BY FATHER TO SON AND JELOUSLY PRESERVED.

THE TOWN OF COLONNATA
Colonnata, is a small borough in the town of Carrara. Its origin goes back to the beginning of the second millennium. It is at about 650 meters above the sea level, in the heart of marble pits.
The name “Colonnata” probably comes from the Roman colony of slaves deported in these region to work in the marble pits near the town. 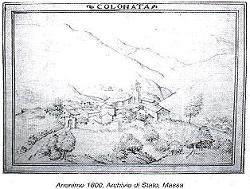 THE MARBLE BASIN
The marble basins, where the whole ageing takes place are containers of various dimensions made by emptying a unique white marble block from Carrara.
The most valuable, because they are considered the most suitable, are the ones made with extremely-solid marble, with a very fine grain, called by the quarrymen “cristallino”, extracted in Colonnata from the pits of the Canaloni area. 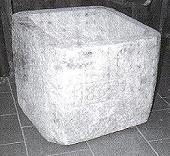 THE RECIPE
Before consumption, the salt and spices are removed from by scraping the surfaces of the piece of lard with a sharp knife. Then the lard is very-thinly sliced and put on toasted and warm bread toasts. Finally, some slices of tomato (slightly unripe) are added for the joy of gourmets.
This is the recipe of the elder quarrymen. 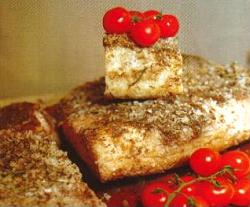